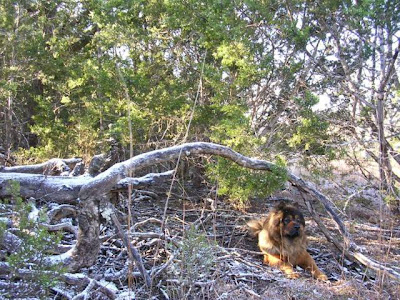 I lost Alex a year ago today. I worked the day shift, which meant up before dawn. I woke up to the alarm on my cell phone, got out of bed, and put Alex out. I don't remember every detail. I wish I did. I can picture him sprawled on his grimy doggy bed by the front door. He was probably snoring. I hope I squatted down and stroked him called his name and gently woke him, but it's just as likely that I nudged him with a bare foot until he stirred, then ushered him out the back door while I got ready for work.

Work was work. I don't remember it being a busy day. Holidays can go either way. Some folks dropped off a dozen or so plates of turkey and dressing for us, so I didn't eat at Whataburger for a change. My K9 officer's wife also brought in some turkey, stuffing, gravy, the works. I probably ate twice, and took another plate home with me. Paper plate covered in plastic wrap, I drove carefully so as not to slide it off the seat and into the floorboards. I probably was on the cell phone with my girlfriend on the way home, but like so much of that day, I am really just making a guess based on what I usually did.

Alex was lounging by the tractor shed when I drove up the dirt road. He heard me coming and ran to meet me, chased my truck up to the cabin, was dancing when I climbed out. I guess I petted him and maybe played with him a little on the way to the door. I don't know.

I let him in and stripped off my pistol belt. Uniform shirt and body armor got draped over the back of a chair. I planted myself on the couch to eat my plate. I was in my socks and threw my old blue fleece on over my teeshirt because it was chilly in there. I don't remember what was on TV, I think I Tivo'd the Cowboys game. Alex plopped down by the couch and gave me the beggar eyes while I ate. I gave him a bit of turkey, then told him no when he begged for more.

I finished eating and gave him the plate to lick. That makes me think I had it on a real plate, so I guess I moved it from the paper plate to a real plate and maybe heated it up in the microwave. Probably. Anyway, I let him lick the plate clean, and he noisily lapped up the gravy and bits of stuffing and whatever else there was left over while I put my feet up and watched whatever I was watching.

I heard him throw up maybe half an hour later. This wasn't a big deal, really. Dogs throw up sometimes. When I heard him retch, I got up and saw him sitting on the floor, looking sadly up at me. He didn't get sick inside often, but when he did, he always had the good manners to be embarrassed. I got up to put him out so he could finish puking outside.

He didn't get up to go outside when I told him to, so I grabbed his collar to get him to move. He didn't budge. He scrabbled a paw a little but couldn't get up. Something was wrong. His eyes didn't look right. He looked sluggish and dazed. He had slobber by his mouth and could barely lift his head.

I talked to him, trying to see what was wrong, trying to get a reaction, something. I knew it was bad. He sort of responded to my voice, but couldn't get up or really move at all. I got his water dish, but he couldn't drink. I picked him up to take him out to the truck, but realized no vet was open. I found the vet's number, and left a voice message. Alex was panting heavily. I knew I was losing him.

I just held his head in my lap and stroked him and talked to him until he was gone. It wasn't long.

The next morning I dug a deep hole in the rocky ground under a little stand of oaks. I wrapped Alex in a soft serape. I sat and talked with him before laying him to rest. I buried him on a hillside in a pasture behind my cabin. He is there now, under the oak trees.

Turkey bones. My landlord put some turkey bones out by the tractor barn for the two cats out there. Alex chewed them up and I guess they cut him up inside and that's what killed him.

For weeks, even months afterwards, I would catch him out of the corner of my eye, laying on the floor. I'd turn my head and of course he wasn't there. I'd stagger out of bed in the morning and go to let him out before I would remember. The phone would ring and it was so strange to not hear him whine like he always did, which always annoyed the hell out of me. I missed it, missed not having him underfoot. Even missed his stupid hair shedding all over the place. The carpet is still full of his fur, a year later, no matter how many times I vacuum.

I got Alex when he was eight weeks old, a little furry ball. He didn't want to step from the carpet onto the vinyl flooring of my apartment's kitchen. His first snowfall a few weeks later, he huddled under me until finally cautiously walking around, lifting his paws high in his dainty way. He was almost ridiculously easy to housebreak and train.

Alex could look a little intimidating, but he was pretty good with people. It was his nature to be somewhat aloof around strangers, but he was never aggressive. He warmed to the people in my life. I was the only person he ever bit. Other dogs sometimes bullied him, and he was too passive to do much other than try and avoid them. He had good manners and was a little gentleman.

He was a cat chaser when young but he always had a puzzled look when cats responded to his friendly advances with slashing claws. Squirrels loved taunting him, chattering at him from the safety of the trunk as he barked in frustration below. He had some small misadventures with an armadillo and a skunk once. He once dashed into a herd of buffalo, squaring off with a big old bull, barking and snapping as the buffalo snorted and pawed the ground and made short charges that Alex easily dodged.

He didn't like the water much, but as he got older, he lost his fear of it and would often plop down in a creek to cool off on our hikes. He hated being left behind and all I had to do to get him to go into a happy frenzy was jingle the truck keys. When he was a puppy, he would lay in my lap as I drove, and when he got too big to do that, he still would sometimes lay his head on my leg and doze as I drove.

I miss coming home from work and him dancing circles around me. The way he would leap to his feet and scour the premises for the offending cat whenever I would say, "Get the kitty!" He actually got along very well with cats in his later years, but he was always on the hunt when he heard that little phrase.

I miss him chomping on his chew toys, chasing the deer and rabbits, playing hide and seek with me, giving me high fives, enduring baths and the bad haircuts I gave him, putting up with my singing, being my hiking buddy. I miss my friend.